This tutorial serves as an introduction to EEG experimental protocol.

Experiments demonstrate a theoretical thesis given the hypothesis. The reason of running an experiments in the first place is because there is something to learn. In experiments specificity and preparation are your friends. A very specific thesis is easier to prove and establishing parameters; planning ahead subjects requirements and tests protocols in order to study is more efficient. Usually subjects give one day availability and they don’t come for do-overs. It is also very difficult to find many subjects in EEG experiments. Therefore use what resources you have at the maximum and cross your fingers you end up gathering everything you need to demonstrate your thesis.

Before you advertise the experiment and gather participants, you have to decide on subject criteria. Selected subjects have to meet all pre-determined requirements. Those are designed to match the hypotheses, laws and ethical regulations. The requirements that match the hypotheses differ from experiment to experiment. The requirements that match laws and regulations are common for all EEG experiments. Those ensures safety for all participants and may vary slightly from country to country (but they are generally similar).

The subjects can all have the same requirements or divided in groups that differs by some criteria. Single group experiments are useful to study a specific phenomenon. Two or more groups are useful to study whether the difference affects any values. When studying a mental healthy group and a group affected by a mental disease, the first group is usually called control group.

A later subjects selection stage happens after subjects cleared for the test take it. The data gathered is not always clear enough to process. Some of the reasons to reject a subject after recording are:

It is recommended to check the data before starting processing. In case of missing data, the subject can be rejected or brought in again for additional tests.

The EEG experimental protocol requires acquisition and processing. Participants are interfacing with the acquisition setup in the recording room. Once the experimenter acquires the EEG data, they can also process it in a secondary location or store it. The personnel involved the two steps differs as well:

Fig. 1 shows the general block for acquiring the signal during an experiment using visual or auditory evoked potentials. 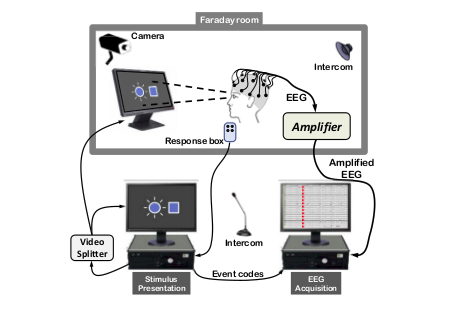 To obtain EEG data we need a stimulation block, a recording block and the hardware to synchronize the two.

When the stimulation occurs is an essential information. Either the software records the stimulation time or the stimuli are visible on the EEG signal track. During testing the medical staff should check whether it’s been recorded. In case it isn’t, they should restart the test when possible, record it from then when it’s not.

The most famous environments are Matlab and Rstudio. Each of them have specific libraries for EEG signal processing: EEGlab for Matlab and EEGkit for Rstudio.

Among the useful programs, there are some to visually process EEG. Some are useful to get a general idea of the signal shape and frequency range. EEGview is one of them. Other programs further process the signal and provide other information on the data. sLoreta, for example, produces low resolution electromagnetic tomography from the EEG recordings. The method’s hypothesis is that the brain works similarly to an electronic circuit. sLoreta uses the data from the potentials on the scalp recorded with the electrodes. It hypothesizes the resistance of the brain, based on medical studies. So it estimates the electrical neuronal activity distribution (current density vector field). This program also provides 3D model of the head and maps of the distribution.

The focus on the study defines whether use EP or non-EP.

The non-EP studies map the baseline of the mind. EEG activity recorded during relaxation and sleep are part of the non-EP data. They map the brain of subjects affected by selected diseases and physical states (like being drugged, being asleep or in a coma).

The signal before the evoked potential spikes is usually a relaxation signal, called baseline. The nonEP is also used as the signal for the removal of the baseline during EP signal processing.

EP experiments study a specific path inside the brain. From the visual nerve or the hearing system, the cognitive response to a stimulus. There are four kinds of evoked potentials.

Evoked potential are a non-invasive way to study sensory pathways abnormalities. They are transient waves on the EEG after each stimulus. These are the hypothesis made on the resulting signal:

The parameters of interests are:

Variation in the values of the parameters could be caused by different kinds of neurological impairments.

The Visual Evoked Potential (VEP) with clinical significance is from N75 on.

A video screen generates the stimulation. The most common protocol uses a chessboard pattern (black and white squares) displayed on the screen. A dot of a different color is positioned on the center of the screen, in high contrast with the background pattern. The subject’s task is to focus on the fixed dot while the background chessboard switches colors: the squares go from black to white to back again. The repetition rate could change, the frequency rate is from 1 to 300 Hz.

In case of subjects with lack of focus or unable to keep their gaze fix, a flash stimulus on a dark screen is used as stimulation.

The Auditory Evoked Potential (AEP) experiments study the propagation of the signal from the acoustic nerve to the cortex. The tree responses depend on the latency:

The sound delivery system consist of headphones. The subject listen to different series of click-like sounds from one or both sides at once. The experimenter masks the non stimulated ear with a band limited noise, called pink noise. Usual repetition rate varies from 8 to 10 clicks per second, with a pressure level going from 40 to 120 dB. The electrodes behind the ears record the stimuli used to isolate the AEP window.

The clinically interesting data are up to the N40. It describes the neuronal connection between the cerebral cortex, the spinal cord and the nerve stimulated (usually is the median nerve, the tibial nerve and the peroneal nerve).

Fingers or legs are stimulated by electrodes situated in proximity of the sensory nerve fibers.

The Transcranial Magnetic Stimulation (TMS) is a non invasive experiment. It measures the cortical excitability by inhibiting or improving it. It is the only stimulation that testes higher cognitive areas. It requires a specific medical instrument to create the magnetic stimulation.